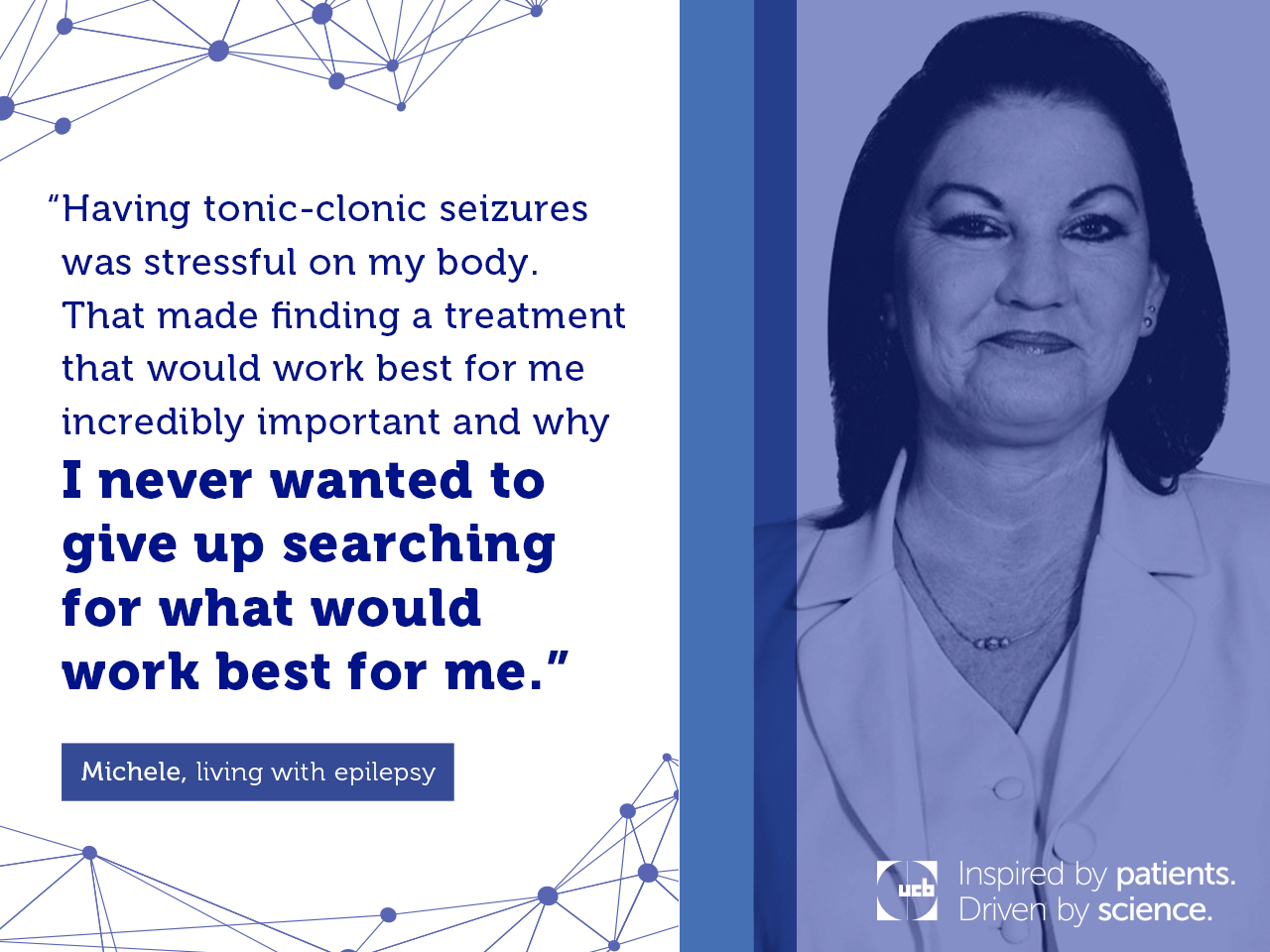 Michele had heard about epilepsy before, but it wasn’t until she was 28 years old that she experienced her first seizure. “It’s the one I remember the most,” Michele said. “There is no other feeling than when you think you are going to die. I kept thinking this is it. It’s over.” While swimming alone in her pool, Michele experienced her first tonic-clonic seizure that almost caused her to drown. “Not only was I going under the water literally,” says Michele, “but I felt like I was drowning in my own body.” Leading up to her seizure, Michele remembers feeling like her body was exploding from the inside as an enormous pressure began to build up in her head and chest. Thankfully for Michele, a serviceman had stopped by her house early for their appointment when he pulled her from the pool and took her to the hospital after a second seizure.

During her hospital visit, Michele was diagnosed with epilepsy and found that her seizure types ranged from generalized to complex partial. The tonic-clonic seizures caused Michele’s body to seize in rigid positions as she convulsed. When she experienced complex partial seizures, Michele tended to stand on high furniture as she lost focus, both mentally and physically. “I’d been hopeful that brain surgery might work for me, but it turned out I wasn’t a candidate,” said Michele. This was only the beginning of her epilepsy journey. “I rode the medication merry-go-round, trying more than 25 different medications and medication combinations. I was frustrated and repeatedly disappointed again and again, but I never lost hope,” explains Michele. “Having the tonic-clonic seizures was stressful on my body because the seizures were so powerful. That made finding a treatment that would work best for me incredibly important and why I never wanted to give up searching for what would work best for me.”

Throughout her many treatment hurdles, Michele was attending college where the stress of school and her daily life would cause her to experience anywhere from eight to ten seizures a week. “They were mostly tonic-clonic seizures and then a few partial complex ones,” she explains. “For me, epilepsy is such an overwhelming disease that I even went into a bout of depression four years into my diagnosis.” Michele felt that her independence was taken away. She could no longer drive or go places unaccompanied. “Eventually, I became stronger mentally and was no longer afraid of my seizures. However, it frustrated me when my family kept trying to tell me what I could or couldn’t do,” Michele explained.

Thankfully, since then, Michele has reached a point in her epilepsy journey when she has gone three years without a seizure. Her experiences have inspired her to build awareness about epilepsy and what it can feel like to have a seizure. She also wants to help educate others about how to appropriately react to someone who has a seizure. “For instance, for me, in those moments before I get a tonic-clonic seizure, I get a weird sensation in my ears and a strange feeling in my stomach and head,” Michele explained. “My husband would move anything that I could potentially hurt myself on and stand there timing the duration of the seizure until it was over.”

Michele also explains the aftermath of a seizure from her perspective, “Coming out of a seizure was exhausting. I was so sore.” Said Michele. She would spend about 25 minutes to get back to herself after being confused and disoriented. “Often, when it happened, I was out in public somewhere. People would call an ambulance and really freak out because they’d never seen someone experience a seizure before.” With a brave attitude, Michele claims that the tonic-clonic seizures that she experienced often looked a lot worse to others than they actually were. “As long as they didn’t last too long and I didn’t break anything, I was fine,” says Michele. “When I would come to again, everything would be back to normal.” Coming out of a seizure tended to be a slow process for Michele as she needed time to bring her surroundings back into focus and move on with her day.

“Since being diagnosed, I’ve realized the importance of having hope. With hope, anything is possible, but without it, even the smallest of tasks can seem impossible,” Michele says. “I really want people to know that it’s important to be proactive and help their doctors by giving as much description as they can and explain how the medications make them feel so they can hopefully get seizure control a lot sooner than I have.” Michele used to think that everyone’s seizures were the same, but she has discovered that simply isn’t the case. Being different can be okay, and Michele urges others not to give up hope but instead educate others about epilepsy.