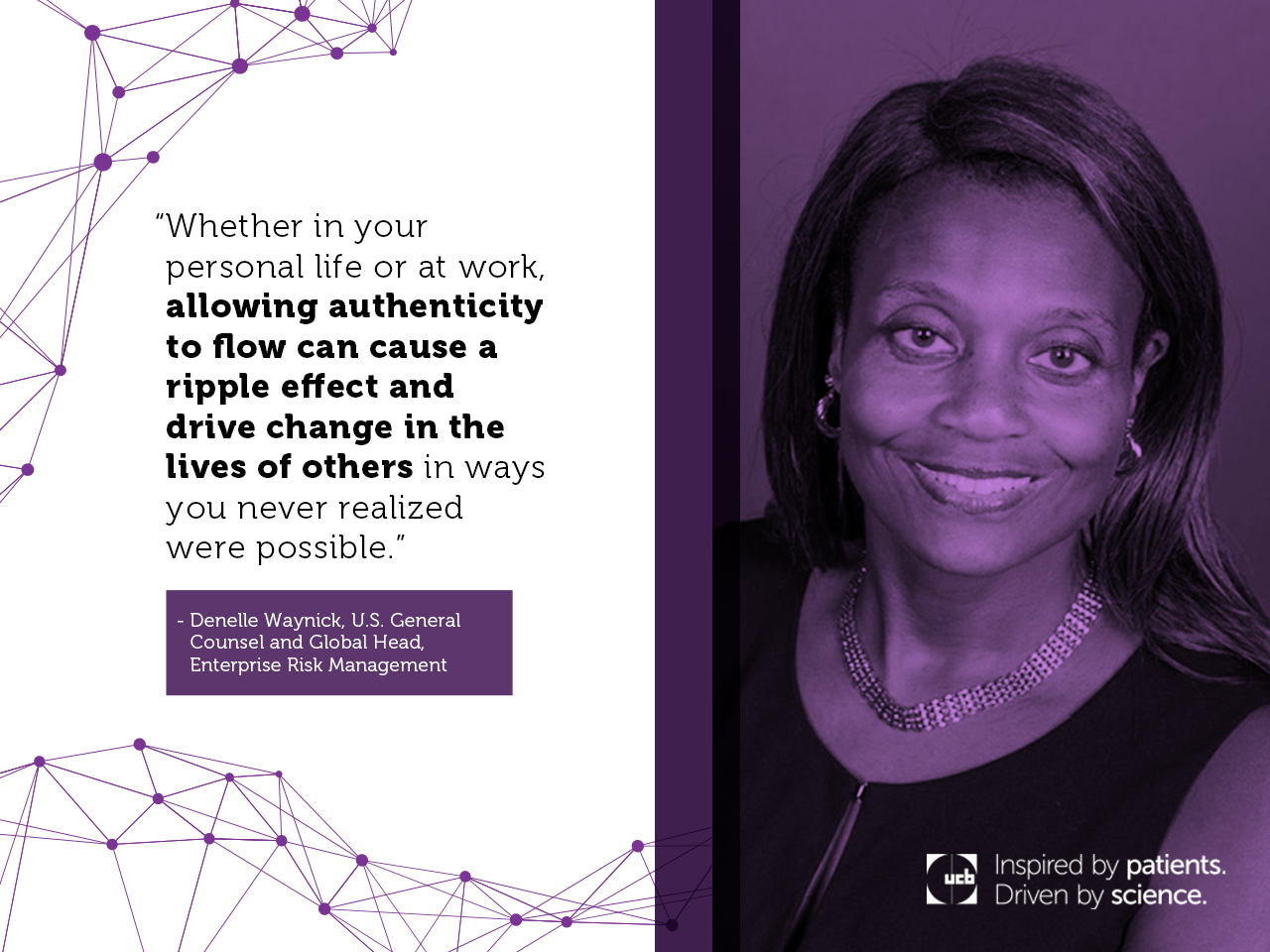 Nov 06
What You See Is What You Get

UCB's Denelle Waynick, VP, Legal Affairs (U.S.), U.S. General Counsel and Global Head, Enterprise Risk Management, leads by example by being true to herself to encourage others to do so too. Read more from Denelle on why by being authentic to yourself, you become stronger as an individual, leader, and employee. Read the full article on LinkedIn.

'Before becoming a lawyer, my knowledge of what it meant to be a lawyer was informed by what I saw on television. Growing up, I did not know anyone in the law profession, but I was inspired by how those TV lawyers, like me, loved to talk and debate. That love of talk and debate eventually led me to law school at Howard University, a historically black university where the likes of the storied civil rights activists Thurgood Marshall and Charles Hamilton Houston attended. To feel like I was a part of that legacy reaffirmed that I had chosen the right career. And as a young lawyer, I was driven by the fact that my law license gave me the position to affect justice on behalf of others who could not advocate for themselves. This realization of the impact I could have helped me define who I was and my ‘why’ for practicing law.

As a leader and as an individual, I don’t know how to be anything other than myself. I know that may not be the case for everyone, but I think leading by example and not hiding parts of who I am encourages others to recognize that it’s ok. And by being authentic to yourself, you become stronger as an individual, as a leader, and as an employee.

Over the years I have learned two lessons by tapping into the strength that is being true to myself.

The first is authenticity enables me to draw on resilience when I need it most.  I am unapologetic that I am, and always have been, a single mother. My son was born during my first year at the law firm, and being an unmarried woman, even in 1992, was not the norm—at least not for national law firms. My authenticity, coupled with my desire to be successful caused me to dig deep and tap into the principle of resilience (although in all candor, I didn’t know that’s what it was called at the time!)  I carried myself as any other expectant mother did.  I made no excuses for my situation.  I remained focused and committed to my work.  And perhaps more importantly (this is where the authenticity comes in), I made no apologies to anyone for my impending motherhood—even though there was no impending marriage.   It is that authenticity and that courage that later in my career allowed me to be an example to another young woman, who was a law student interning at the firm and an unwed mother-to-be. She did not think she would be able to fulfill her dream of becoming a lawyer or ever be welcomed at the law firm. By sharing my experience, it gave her the courage and support to draw on her resilience, pass her bar examination, and land the job at the firm despite the challenges. She came back to me years later and shared the impact I had on her life. It’s those moments that are so heartwarming and reveal the true power of authenticity. And once you experience that power, you cannot do anything else but continue to be yourself, so you can positively affect other people.

And that leads to my second lesson - encouraging authenticity in the workplace drives innovation through diversity of experiences and perspectives. Recently, I became a caregiver after my mother suffered a stroke. This experience made me more committed and invested in ensuring the solutions UCB is delivering are reaching as many patients – and those who care for those patients – as we can. Even if that means we are pushing the envelope or leading in new spaces. Being true to my experiences as a caregiver and allowing this new perspective to influence how I approach projects has amplified my desire to push us to further innovate and think differently from a company perspective.

I believe when you bring your authentic, whole self to work every day unexpected, positive things come of it.  For me, I show up as an outspoken, sometimes provocative, woman who loves to debate and challenge and be challenged—a woman who just happens to be a lawyer! Whether in your personal life or at work, allowing the authenticity to flow can cause a ripple effect and drive change in the lives of others in ways you never realized were possible.


Read the full article on LinkedIn

Denelle Waynick is VP, Legal Affairs (U.S.), U.S. General Counsel and Global Head, Enterprise Risk Management for UCB, Inc. She is a member of UCB's Board of Directors, serving as its Secretary, overseeing the Corporation’s governance. Further, Denelle is a member of the U.S. Leadership Team, the governing body which establishes, oversees and implements the operations of the organization.  Denelle is a respected leader in both the healthcare and life science industries.  For 20+ years, Ms. Waynick has built her expertise as a valued business partner providing sound, strategic counsel on a wide range of global business transactions, including mergers, acquisitions, and divestments.  Ms. Waynick has held multiple positions of leadership within law firm, government and corporate settings.